THE HISTORY OF TEMPLE 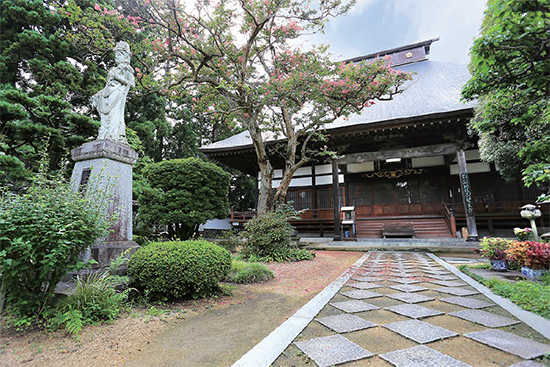 The Temple of the Emerald Light is this temple's "title." It was founded in the Tencho Period (826) of the Heian Era and is dedicated to the Buddha of Healing, the Yakushi Nyorai, the image of which is the work of (Buddhist) Saint Kobo (also known as Kikai), and which, being marvelously efficacious, receives the faith of many.
Io is also the family temple of the entire Sato clan. Referred to as Shinobu from as long ago as the Jisho Period (1177-1181) this area was ruled by the lord Sato Motoharu from his residential castle here Otori-jo, or Great Bird Castle. Motoharu, also known as "Lord of the Manor" and "Lord of the Hot (spring) Water," controlled the large area of southern Oshti, and it is his ardent faith that guided this temple to prosperity.
It was around this time that Minamoto -no-Yoshitsune, aligned with the Hiraizumi chieftan Fujiwara Hidehira, had occasion to raise an army, into which Motoharu dispatched his two sons Tsugunobu and Tadanobu. Tsugunobu, the elder, was a loyal and remarkably active close retainer of Yoshitsune, though in an engagement at Yashima Beach on the island of Shikoku, Tsugunobu was mortally wounded when he took an arrow -- shot by Noritsune, Governor of Noto -- that was meant for Yoshitsune.
[The episode is recounted in the famous Tale of the Heike.]
As for the younger brother, Tadanobu: Relations between Minamoto -no-Yoritomo and his younger stepbrother Yoshitsune deteriorated and they became rivals. In order to extricate Yoshitsune, his prime retainer Benkei, and others from the dangerous situation they had fallen into at the Horikawa Palace in Kyoto, Tadanobu identified himself as Yoshitsune, offering battle to the enemy while the real Yoshitsune escaped. Like his elder brother, Tadanobu sacrificed his life protecting his lord.
Entering the Oshu region on their escape route to Hiraizumi, Yoshitsune, Benkei, and followers sequestered themselves here at this temple, burying the hairs of the deceased and performing memorial mourning services for the two brothers.

Meanwhile the two wives of the brothers, hearing of their husbands' deaths and considering how grief stricken the mother, Lady Otowa, must be, suppressed their own grief and donned their husbands' armor and helmets, affecting gallantly a triumphant return of the two brothers in an attempt to ease their mother-in-laws sorrow. Their story is told even now as a model offilial devotion.
Though times do change, the loyalty of the two brothers and the devotion of the two wives continues to touch hearts, for which reason poets and men of letters like Matsuo Basho and Matsudaira Sadanobu, artists, and many others have visited this temple, offering incense and flowers paying tribute to the dead.


On his 1689 walking journey through the north, haiku sage Matsuo Basho visited this temple on May 2nd (lunar calendar). He was 46. Hearing of the loyalty and piety of the Sato family, Basho paid respects, and, filled with emotion over past events, found the temple hard to leave. That night he lodged at Iizaka at a hotspring inn. 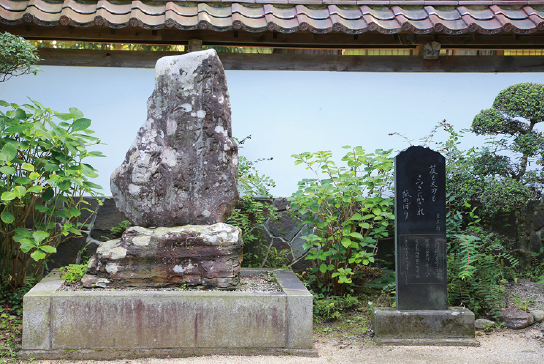 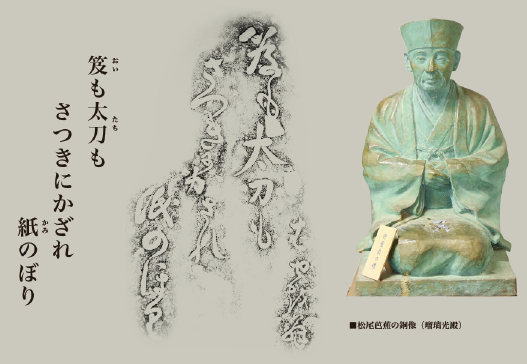 THE TRAGEDY OF THE WARRIOR BROTHERS 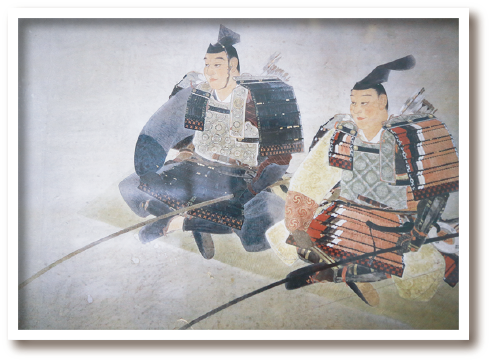 Minamoto Yoshitsune, aligned with Fujiwara Hidehira of Hiraizumi, was raising an army, following which the brothers Tsugunobu and Tadanobu were charged with the mission of unconditionally protecting the life of their lord, Yoshitsune. Both performed admirably fighting the Heike, but, regrettably, the elder, Tsugunobu, was mortally Wounded fighting at Yashima (in Kagawa Prefecture) where he was shot with an arrow protecting Yoshitsune.
After that relations broke down between Yoshitsune and his elder (step) brother Minamoto Yoritomo. Yoritomo pursued Yoshitsune and followers to the capital (now called Kyoto) where things became desperate for the younger Minamoto. In order to allow Yoshitsune and others time for a successful escape, Tadanobu identified himself as Yoshitsune and derw the enemy away. But Tadanobu himself was killed.
Later, as Yoshitsune and troops made their way safely north to Oshu en route to Hiraizumi, they stopped to meet Tsugunobu and Tadanobu's father Motoharu, relating the distinguished military service of his two sons and performing memorial mourning services.


Beside the gravestone of Lord Motoharu and Lady Otowa is an old tree; whether or not it is the spirit of Otowa's Sorrow or of her maternal feeling, this camelia's buds drop unopened. Before long, people began calling this tree the Otowa Camellia!

Lord Tsugunobu's wife's name was [Young Cherry Tree.] Tadanobu's wife was Maple Tree.
Together they were here daily praying for the repose of the souls of their dead husbands who gave their lives for their lord, Yoshitsune. The figures of the two wives, dressed as their warrior husbands in order to relieve the great Sorrow of their mother-in-law Lady Otowa, an old woman who had lost her two sons, are honored in the temple's main hall.
long Sword at side
Sad arms
wife, autumn
(Jitoku) 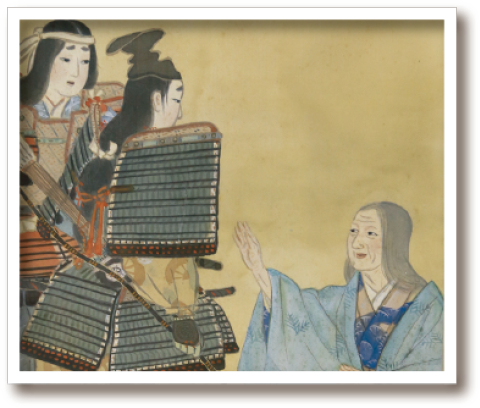 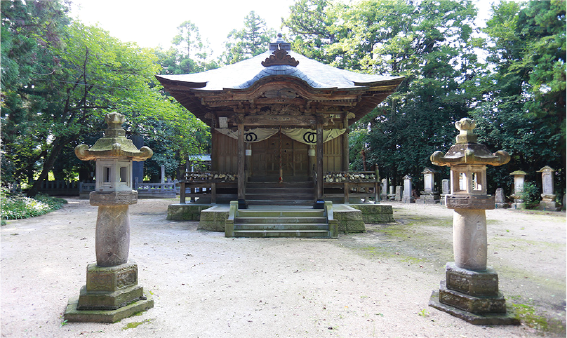 >The place worship for feudal lord Sato Motoharu's entire family, the inner temple is dedicated to Yakushi, the Buddha of Healing. According to legend, an imperial prince named Sabako [characters read "Mackerel-Lake"] found the local hotspring and was later here enshrined. For this reason the Buddha of Healing is known here as the Sabano [characters read "Mackerel-Field"] Yakushi.
The Yakushi Nyorai, or Buddha Who Can Cure Any Ailment, is also called the Dai-Io- Butsu, or MedicineKing Buddha. As can be imagined from such a name or by the figure itself holding a canister of medicine, this Buddha, with its fervent vows to relieve all beings from suffering, has from long ago held the faith of people from all over.
What the Yakushi Nyorai's "medicine" symbolizes is the blessing--that we may live -- of that source we call the universe or cosmos. One comes to sense within the word "live" that we are "kept alive" by the blessings of the earth.
Your visits are welcome: For the offering of thanks for some kindness received, for relief of mind and body, for the prosperity and comfort of all people, and for peace on earth.